When I told my husband that I’d invited a guy who’s on a motorcycle adventure (aiming for some 23,000 miles around the United States in 10 weeks) to spend the night at our house, he gave me The Look.

He didn’t say anything; I just got that sort-of side eye look he gives – you might have seen it, if you’ve spent any time with him.

And, to be honest, I sort of unrolled the information slowly, because I was pretty sure that I’d get both The Look and The Side Eye; but I was also pretty sure that we could get past it, if we moved carefully.

(Once, someone I respect and care about told me, ‘Beth always gets what she wants.’ He wasn’t necessarily nice about it – we were in the middle of an argument – and it made me so angry. I’m not sure if I felt insulted or caught, and, quite frankly, I’ve been worrying over that ever since, like a tiny piece of steak caught between your teeth. Do I really always get what I want? Or, more importantly, do I bulldoze my way in, out, and around the people I love to get what I want?

This concerns me, as half the time, I’m not even sure what I want. I don’t trust myself, like John Mayer says, with loving you or anything else. I know I’m impetuous and spontaneous and ridiculously naive at times. I know I refuse to look at details and keep my head in the clouds. I know this about myself, and I don’t trust what I want, which is one sure, strong reason why my husband is a solid match for me; he slows me down and makes me think.

So, I had this strategy, that I knew he would need some time to process, even though I knew this guy wasn’t an ax murderer, and I think hospitality matters and that the most wonderful thing we should do is open our home and feed this guy dinner and let him spend the night and let’s just DO IT FOR GOODNESS’ SAKE.

Plus, I was curious. What kind of person decides to spend 10 weeks on a motorcycle, criss-crossing the country to the tune of 23,000 miles? I mean, I knew who he was, but I didn’t really know him.

Tracy and I went to high school together. Without the internet, we’d probably have never, ever even thought of one another again. Even with the internet, I was unsure; did I know him from choir? Did he write for the school paper? Was he a year older than me?

Wrong. He was a band guy – trombone, to be exact. He wasn’t a journalist; in fact, he ended up in education, like me, teaching music. I nailed the age – he did indeed graduate a year before I did, but we were acquaintances because of school musicals, mostly. That’s about it for our history, unless there’s something else that I don’t remember. And just like everybody wants to reach out and touch somebody through Facebook, we’d become ‘friends’, which is to say we gave each other permission to look at our photos of our kids and our yards, and to read our blog posts.

So Tony says Okay and I realize that really, I am not even CLOSE to being ready for company, as the boys’ rooms are wrecked and the girls’ room is still buried under wedding dresses and clutter. There’s the basement space, but the bathroom is filthy – like unfit for human use – and the bed hasn’t been made.

So I made a pie, and started fixing dinner for a guy who said he’d been eating Ramen and sleeping in backyards. He showed up, but I didn’t even know it, because he had rolled up, found Tony outside in the garage and they immediately started talking bike talk. That gave me time to clean the bathroom.

We ate dinner and caught up and asked the inevitable question: Why are you doing this?

I think his answer satisfied me – it started out as a Guinness Book of World Records thing, totally legit, and it was fascinating to hear about that process. He eventually abandoned that plan – did you know that a traveling world record attempt requires two full minutes of video while you are in transit, every hour? Crazy! So the world record won’t happen this trip, but he is pressing on with his original dream to get the miles under his belt.

He shared his stories of the road and even more (hilarious) stories of school bus wrecks, and students and education…and as we sat and talked, a peculiar melancholy settled over me.

I couldn’t explain it then, and I’m less able now. I wish I could pinpoint it; a swirl of nostalgia, coupled with a total lack of nostalgia, talking with a man who left the era in which we were comrades, of a sort, to pursue a solid, enduring marriage, three kids and a varied, but settled, career. I watched my husband connect and really, deeply enjoy the conversation; he was inspired and encouraged. That pleased me, greatly.

But for me, something was amiss. Expectations, maybe; I only know Tracy Farr from the memories of adolescence, and I don’t remember much. We didn’t do the, ‘Hey, do you remember when?…..’, because we didn’t have any of those.

Yet, he knew me, the girl I used to be. Or at least he saw me, way back then. And maybe I was hoping for some clue, some revelation or connection between this rich place I find myself in today, and the wild, iridescent mayhem of being sixteen. Maybe I thought he’d walk into the house of this fifty-year old woman with nearly grown kids and say, ‘I can tell you how you got here because I knew you way back when and this is what I saw…’ But that’s ridiculous.

We didn’t have time for those conversations, for the meandering exploration of what we hoped and dreamed and where we are. We’d start from scratch, anyway; we had no notes to compares, no foundational history other than geography. We both stumbled through and survived adolescence and built lives doing the best with what we had, and here we are, and such is life.

So Tracy Farr rode quickly into our lives and regaled us with stories. He rode out just as quickly, on the move; no time for sight-seeing or even breakfast, as his purpose is wrapped in deadlines and mileage. But for just a few hours, over dinner and pie and his best stories, there was some sort of closure, some acknowledgement of that life that was High School in Grand Prairie, Texas; some brief connection of being in our fifties, in America, with all the wide open spaces you care to explore right in front of you. Ours for the asking.

I’m so glad Tracy came, and I’m praying for safety as he continues to ride.

You can see his pictures of his trip here; they are magnificent. He writes about his travels (and other stuff) here. 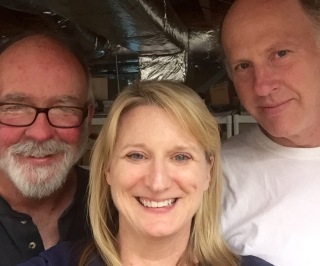 One thought on “The Guy In The Basement”