When the kids were little, we didn’t do Halloween. Today, we participate in the candy part, but I refuse to drop good money on overpriced costumes. And I hate – really, really hate – spooky stuff. No gore for me – the spider is as creepy as we get!

Here’s the way we do it: Come home after school on October 31 and figure out something fun to wear. Be creative. Dig through the closets. Go up in the attic. Look for some makeup. We might – just maybe – make one trip to the Dollar Store for supplies, but that’s it. Use your imagination and come up with something fun.

So, that’s what we did. It was really cool when John R. called and asked if he could come over; three years ago, he and his sister joined us to walk through the neighborhood, and it’s become a tradition since then. This year, at 14, he didn’t want to dress up (“I’m just being me, and I’m not asking for candy,” he said) but he wanted to be here. Elijah came – he and Sarah had decided to go as ketchup, and his mom helped up with a pre-purchased t-shirt for each of them.

The rest of the kids dug around until they found something fun. Their dad came up to check it out and walk around a bit with them. I threw together some homemade chicken soup and we had a great time. 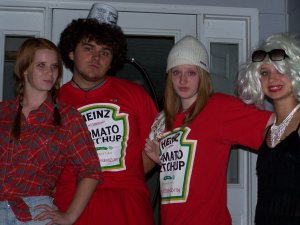 Here’s Shannon as a conservative Daisy Duke, Elijah and Sarah as ketchup bottles (check out his ‘cap’, made from a potato salad tub and some dental floss…) and Syd as Marilyn Monroe.

The platinum wig was a hit. She started with 5-inch silver heels, but at the end of the driveway, as she staggered about bow-legged, she opted for flats instead.

David wore Syd’s dance outfit, made his hair all crazy, let Sarah give him eyeliner and mascara and went as a dancer. Sort of.

Daniel was an emo guy. He wore all black, with a bandana hanging out of his back pocket. Here, I think he’s emo with a touch of Dorito stains at the corners of his mouth…

Here’s Marilyn and Hip Hop Dancing Boy getting ready to venture outside.

Syd often babysits Macy and her sister, who live across the street. See how Macy is looking at Syd’s hair? As we started to walk away, I heard Macy’s tiny, horrified voice, sounding completely stunned -“Mama, what happened to Sydni’s beee-a-YOU-tee-full hair?????” Her Mom laughed and said, “I don’t know! What happened to it?” Macy, still in shock, said, “It’s all silver!!!!” She may be scarred for life.

Here’s the crew. We’ll probably remember these Halloween escapades long after other memories have faded. They didn’t bring home much candy this year, but I know they had a great time.

7 thoughts on “Let’s Get Creative”